The square is the complex of palaces, courtyards and temples that are built between the 12th and the 18th centuries by the ancient Malla Kings of Nepal. It is the social, religious and urban focal point of the city. Taleju Temple, Kal Bhairab (God of Destruction), Nautalle Durbar, Coronation Nasal Chowk, the Gaddi Baithak, the statue of King Pratap Malla, the Big Bell, Big Drum and the Jagnnath Temple are some of the interesting things to see in this Square. An intriguing piece here is the 17 th century stone inscription that is set into the wall of the palace with writings in 15 languages.It is believed that if anybody deciphers this entire inscription, the milk would flow from the spout, which lies just below the inscripted stone wall. Some people say that the inscription contains coded directions to a treasure King Pratap Malla has buried beneath Mohan chowk of Durbar Square. There are several museums inside the palace building. There is an entrance feeof Rs. 250 for all the foreign visitors to visit all the museums of the palace building. 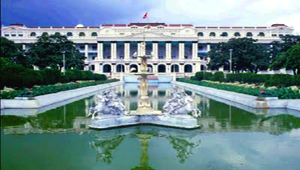 A grand imposing palace built on the neo-classical style. It was the private residence of Rana Prime Minister. Now it's the Secretariat of His Majesty's Government of Nepal. 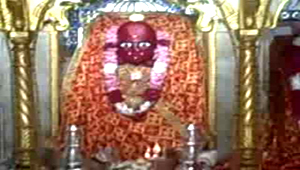 It is at the eastern edge of the Tudikhel, near Shahid Gate. This temple is one of the main "Shankta or Shaktipeeth" temples of Kathmandu City. 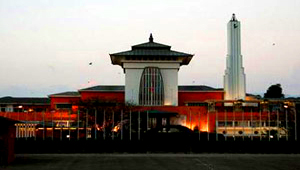 It is the Royal Palace of present King, His Majesty King Birendra Bir Bikram Shahdev of Nepal. The Shah kings moved to this palace from their old palace in the late 18th century. The new edifice was inaugurated in 1970 on the occasion of the wedding of His Majesty king Birendra Bir Bikram Shahdev.
The palace takes its name from the Narayanhiti, a famous historic waterspout situated at the southern corner of the Palace. The Palace compound is immense, surrounded by high walls and guarded by soldiers. 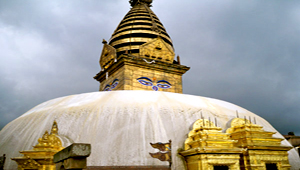 The most ancient and enigmatic of all the Valley's holy shrines lies 2 km west of Kathmandu city, across the Vishnumati river. The golden spire of Swayambhunath stupa crowns a wooded hillock and offers a commanding view of Kathmandu city. On clear days, one can even view a line of Himalayan peaks. The view is splendid at dusk as city lights flicker one by one, and even better when a full moon hangs in the sky. The establishment of Swayambhunath Stupa goes back to the legendary beginning of the Kathmandu Valley.The legend says that when the bodhisattva Manjushri drained the waters of the lake to reveal the Kathmandu valley, the lotus of the lake was transformed into the hillock and the blazing light became the Swayambhu stupa. Swayambhunath stupa is a World Heritage Site. 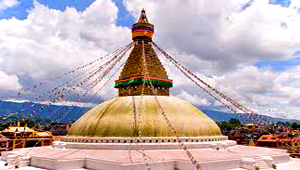 It is the biggest stupa in the Valley. The stupa, well known as Khasti, is also known as the World Heritage Site. It looms 36 meters high and presents one of the most fascinating specimens of stupa design. There are more than 45 Buddhist monasteries in the area. It lies about 6 km to the east of downtown Kathmandu. The Bouddha Area Preservation & Development Committee runs an information center. 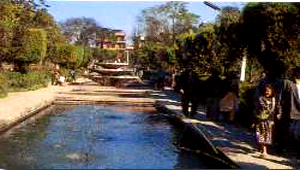 It is situated below Nagarjun Hill about five-kilometer northwest of Kathmandu City. The garden is known for its bank of 22 stone waterspouts (hiti) carved in the shape of sea-dragons. It also consists of religious shrines, fishponds and a replica of the statue of Budhanilkantha. . There is also a swimming pool inside the park. 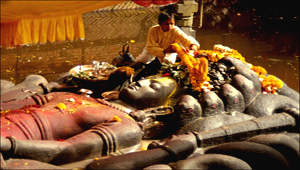 Situated below Shivapuri hill at the northern end of the valley, Buddhanilkantha temple is 9 km from Kathmandu city. The temple consists of a pond in which lies a great stone figure of the Hindu god Vishnu reclining on the coils of a cosmic serpent. The huge statue of sleeping Vishnu is carved from the single block of black stone of a type not found in the valley. It is believed that ages before the two hardworking farmers (husband and wife) discovered the statue when they were ploughing their field.
Besides Budhanilkantha temple, there are other two sets of exactly similar, but smaller statues of 'sleeping Vishnu' in the Valley. One set is in the Balaju garden and the other is hidden in the old garden of Hanuman Dhoka Palace of Kathmandu city. A prophetic dream of King Pratap Malla generated the belief that the King of Nepal should never visit Buddhanilkantha temple on threat of death. He then built the similar statue in two places. 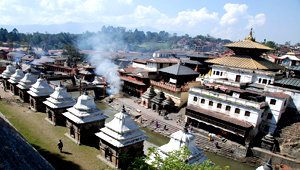 The temple of Pashupatinath is Nepal's most scared Hindu shrines and one of the subcontinent's greatest Shiva sites, a sprawling collection of temples, ashrams, images and inscriptions raised over the centuries along the banks of the sacred Bagmati river.
The richly- ornamented pagoda, houses the sacred linga or phallic symbol of Lord Shiva. Chronicles indicate the temlple's existence prior to 400 A.D, but a shrine may have stood here nearly 1000 years before that. Legend says that Shiva once took the form of an antelope and sported unkown in the forest on Bagmati river's east bank. The gods later caught up with him , and grabbing him by the horn, forced him to resume his divine form. The broken horn was worshipped as a linga and overtime was buried and lost. Centuries later an astonished herdsmen found one of his cows showering the earth with milk. Digging deep at the site, he discovered the divine linga of Pashupatinath
The temple complex has been renovated and improved over the centuries. Entrance to the shrine is only restricted to Hindus, however, one can still get the good view of the sacred temple from vantage points across Bagmati river. Across the river, one can also visit the temple of Guhyeshwori and a classic 6th century ekmukhi "one-faced" linga of Shiva. 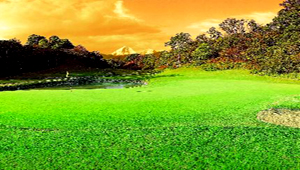 Situated about ten-kilometer northeast of Kathmandu, this lovely Royal Game Sanctuary is also well known as Gokarna Safari Park. Many wild animals like spotted dear can be viewed in the sanctuary from an elephant bank. On the northern side of Gokarna is a pagoda of Gokarneshwor Mahadev. 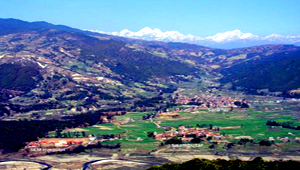 It is a typical Newari town with many fine old buildings and temples. Beyond the village, up a long flight of stone stairs, is Bajra Jogini, a historical temple with a beautiful view of the local area. 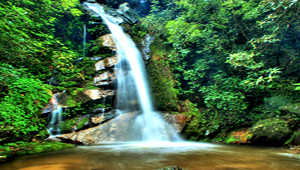 It is a famous for its scenic beauty. There are magnificent waterfalls, cataracts and rock formations. It is an ideal place for picnic requiring a short walk after the motorable road. 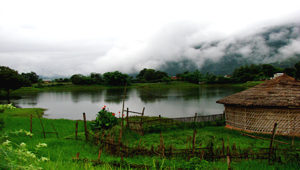 Situated nine-kilometer southwest of Kathmandu, this place is famous for its gorge. All the water of the valley drain through it. There is a small but picturesque temple of Adinath on the top of a hill. From this top one can have a panoramic view of snow capped mountain peaks. 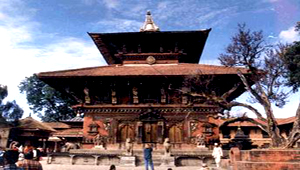 It lies on a ridge over looking the Valley, about twelve-kilometer to the east of the city. It is dedicated to the Hindu God Vishnu. The scared complex is a World Heritage Site. It has one of the finest and oldest specimens of pagoda architecture that is embellished with exquisite wood and stone carvings. 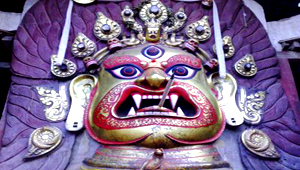 This is a three-storey temple situated in the main Market Avenue called Indra Chowk. The image of Akash Bhairav is displayed outside for a week during Indra Jatra, the festival of Indra (the God of Indra). The festival of Indra falls on monsoon season of Nepal. 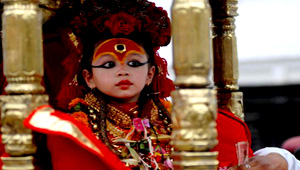 The temple or the residence of Living Goddess, Kumari, is situated in the vicinity of Hanuman Dhoka Palace. The building has beautifully carved wooden balconies and window screens. The Kumari- the living Goddess acknowledges the greetings from her balcony window. Photography is prohibited. 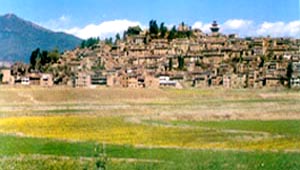 It is a small town, situated on a ridge 6-km southwest of Kathmandu. The ancient township is a natural fortress and has a proud and courageous history. The Chilamchu stupa and the temple of Bagh Bhairav are major sights here. The city offers quaint streets lined with artistic houses and temple squares. The people are known for their skill in building and weaving. 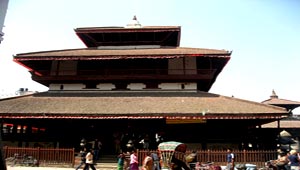 King Laxmi Narsingha Malla built this temple in the sixteenth century. It is said to be constructed from the wood of single tree. It is located near the temple of Kumari. Indeed the city of Kathmandu derives its name from this temple.
Behind Kasthamandap, there is a small but a very important temple of Ashok Vinayak, also known as Kathmandu Ganesh or Maru Ganesh. 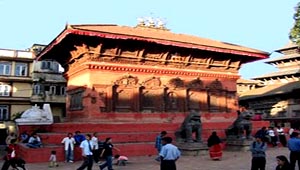 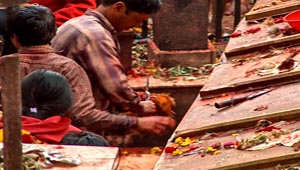 The temple of Dakshinkali is situated about two kilometers south of Shekha Narayan. Dakshinkali is regarded as one of the most important Hindu Goddesses. Pilgrims visit this temple to offer their prayer and animal sacrifices to the goddess. Besides, this place has been developed as a popular picnic spot.